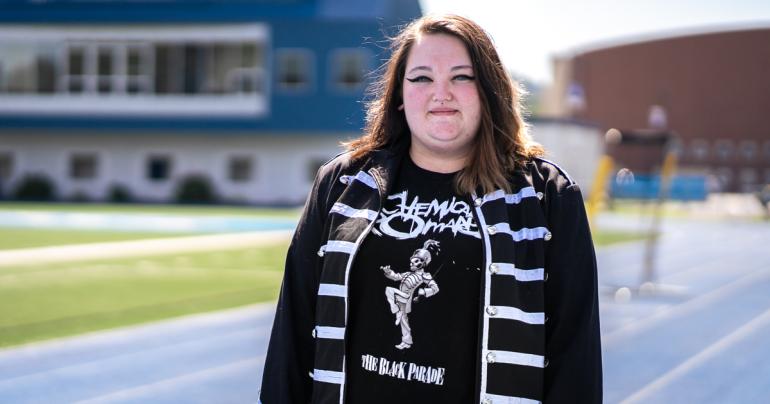 GLENVILLE, WV – Glenville State University senior Caitlin Reed will be the field commander for the Pioneer ‘Wall of Sound’ Marching Band this semester. She is pursuing a Bachelor of Arts degree in Music and hails from Lindside in Monroe County, West Virginia. She is the daughter of Michelle and Eric Reed.

“It’s so exciting to be this year’s field commander! I was a field commander in high school, but this is so different and I’m absolutely thrilled to be working with such wonderful people in the music department. It’s something I didn’t think I would take the opportunity to try in college,” Reed said.

“I’m looking forward to just being a person everyone in marching band can come to and look to for anything. I’m also looking forward to working alongside Dr. [Lloyd] Bone! I’ve learned so much already and it’s just so exciting to get that one-on-one of seeing what it’s going to be like being in that role and having to project emotion and everything else the band needs through my conducting,” she added.

Reed says her inspiration for music spans back to middle school. “I was always in sports but my friends wanted to do band so I thought, why not? I learned to play my instrument and fell in love with it. In high school it really set in that music is what I wanted to do for the rest of my life. My band directors and their friends inspired me to keep doing it, and sure enough here I am today about to be doing what they are,” she said.

Her primary instrument is trumpet, which she has played for 13 years, but she has also learned new instruments throughout her time at Glenville State, including guitar.

She notes that fans can expect a very different field show this year. “Our show is a very high-energy and out there show. The arrangements are so fun and everyone in the band is super excited to show off our hard work,” Reed added.

After completing her undergraduate degree in December 2022, Reed says she plans to enroll in Glenville State’s Master of Arts in Teaching graduate program as she pursues her goal of becoming a band director.